Albert Einstein… Today, this name is known all over the world, both for its revolutionary work in the field of physics and for its atypical personality. But what about as a child? Was he already the genius we know and appreciate or was it quite the opposite? To find out, go to The 3 Suns Theaterduring the OFF festival in Avignon.

Albert is 9 ¾ years old. He is certainly a strange phenomenon, but a phenomenon, for the moment, misunderstood… Albert is a clumsy little boy, dyslexic, rather lonely, mocked by his comrades, not spoiled in terms of beauty according to his own mother and those around him… and for to top it off, Albert can’t express himself clearly. He stumbles over the syllables and his speech problems make him look like an idiot in the eyes of some…

It’s terrible to feel stupid when you’re not, to have the impression of being incapable and to look like a madman when, suffocated by shame, you can no longer manage to contain his emotions. Albert does not understand why he is like that…

… and that may be the problem: Albert asks himself too many questions. He has a pile of whys in his head and brain constantly boiling. But Albert is never happier than when he solves a difficult problem or tries to unlock the secrets of the world around him. Music, books and mathematics are his refuge, but sometimes you have to step out of your comfort zone to move forward… Albert must make a choice: ignore or solve the problems that poison his life.

The situation is not simple. It’s only the 1880s and psychology, as well as knowledge of neurological disorders, is still in its infancy. Fortunately, Albert is not alone. He can count on his dog Trouillard and his family to help him open up to others and control his emotions over the years, so that he can finally express himself clearly and move forward.

An impressive gallery of characters interpreted by only two actors, Tadrina Hocking and Thomas Lempire, with the exception of the dog, for which it will be necessary to make an effort of imagination. Role changes are usually made with a few minor props and a passage behind a huge blackboard, which acts as a screen.

This huge blackboard could summarize, with the stack of books placed on a trolley, the universe of Albert Einstein. It is also a source of anxiety and pleasure for him. This painting is indeed both that of his school, where he was often persecuted, and that on which he devoted himself to scholarly calculations in his spare time.

Unlike the other characters, Albert never leaves center stage. He is constantly under the gaze of the spectators, who observe him struggling against himself and gradually confronting his fears and his demons. Throughout life, we learn to be less afraid, provided we do not run away from what frightens us. And that’s what Albert does, never leaving the front of the stage.

Albert is now 12 years old. He found his way and learned that the difference can turn out to be a great chance. He manages to better understand others, as well as the universe. He is still just as greedy and sticks his tongue out to change the subject or just to laugh.

Albert is a strange phenomenon and a child really unlike any other to discover at the Les 3 Soleils theatre.

Albert Einstein, a child aparta play written from The world according to Albert Einstein by Brigitte Kernel, adapted by Sylvia Roux and Thomas Lempire, directed by Victoire Berger-Perrin, performed by Tadrina Hocking, Thomas Lempire and Sylvia Roux, from July 7 to 30, 2022, at 10:15 a.m., at the Les 3 Soleils theater, in room 1, as part of the OFF d’Avignon 2022 festival. Closed on July 12, 19 and 26, 2022. Duration: 1 hour 05 minutes.

Discover the programming of the Les 3 Soleils theater as part of the OFF d’Avignon 2022 festival: https://les3soleils.fr/
Find, here, all the articles of the editorial staff of Tout la Culture in a special file for the Avignon Festival.

Visuals: Poster and all rights reserved to Lou for the photos.

: Consult our agenda for more details 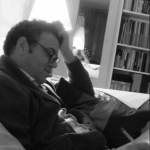 David Rofé-Sarfati is a psychoanalyst, practitioner member of Espace Analytic. He is passionate about theater and leads a collective of psychoanalysts around dramatic art www.LautreScene.org. He is a member of the APCTMD, Critics’ Association, Theater College.